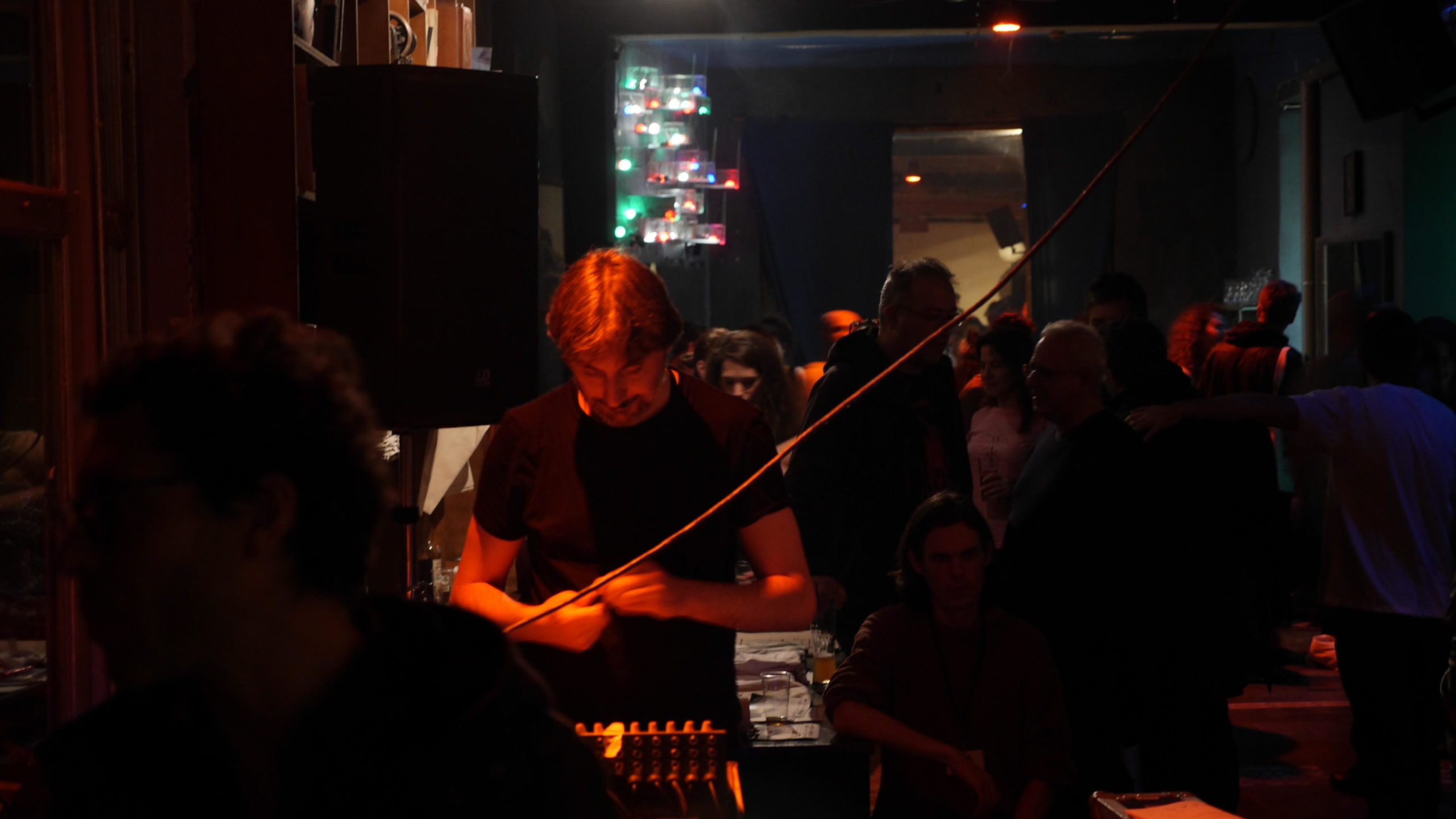 Yiorgis Sakellariou is an electroacoustic music composer, recordist and researcher. Since 2003, he has been active internationally being responsible for solo and collaboration albums, having composed music for short films and theatrical performances, leading workshops and ceaselessly performing his music around the globe.

His practice focuses on the communal experience of listening and the communication between composer, audiences, performance spaces and the rest of the physical and supernatural world. His sonic material is founded on the digital manipulation of environmental recordings. The palette of sounds is all encompassing; from vibrating rail-tracks to refrigerators’ static, and from noisy waterfalls to the humming of insects.

He completed his PhD at Coventry University (April 2018). His research drew inspiration from ethnomusicological and anthropological contexts and explored the sonic symbolism and socio-aesthetic settings in ecstatic religious rituals in relation to field recording, electroacoustic composition and acousmatic performance.

Yiorgis Sakellariou is a member of the Athenian Contemporary Music Research Centre, the Hellenic Electroacoustic Music Composers Association and the Lithuanian Composers Union. Since 2004 he has curated the label Echomusic. He is currently a lecturer at Vytautas Magnus University and an assistant lecturer at the Lithuanian Academy of Music and Theatre. 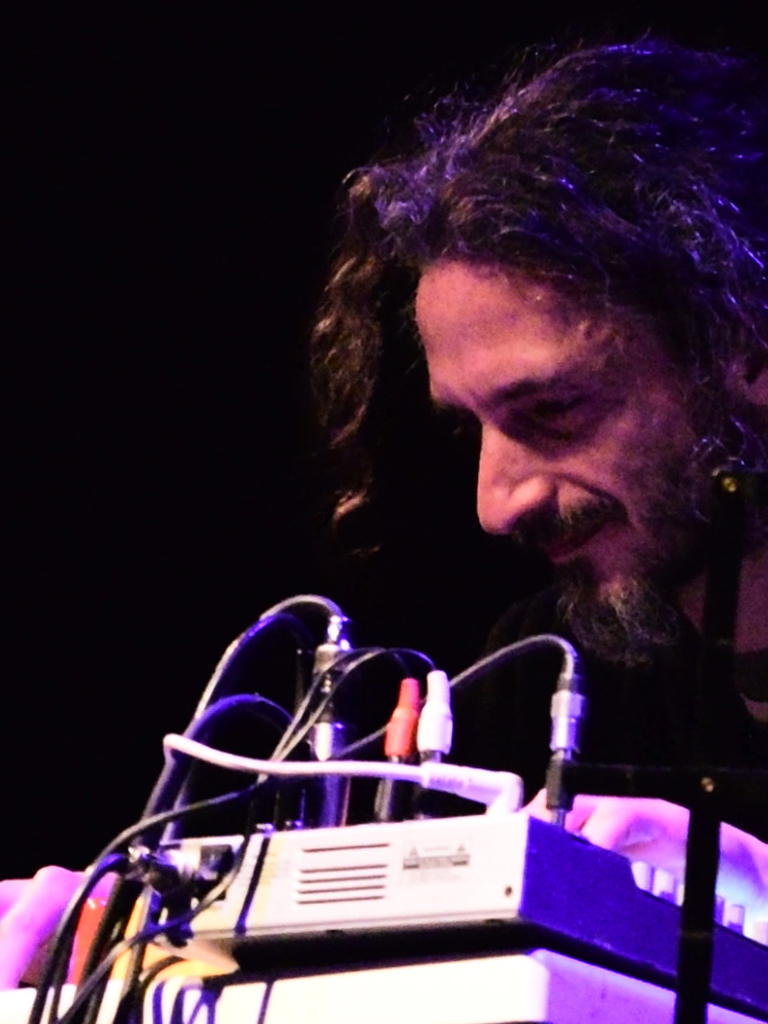 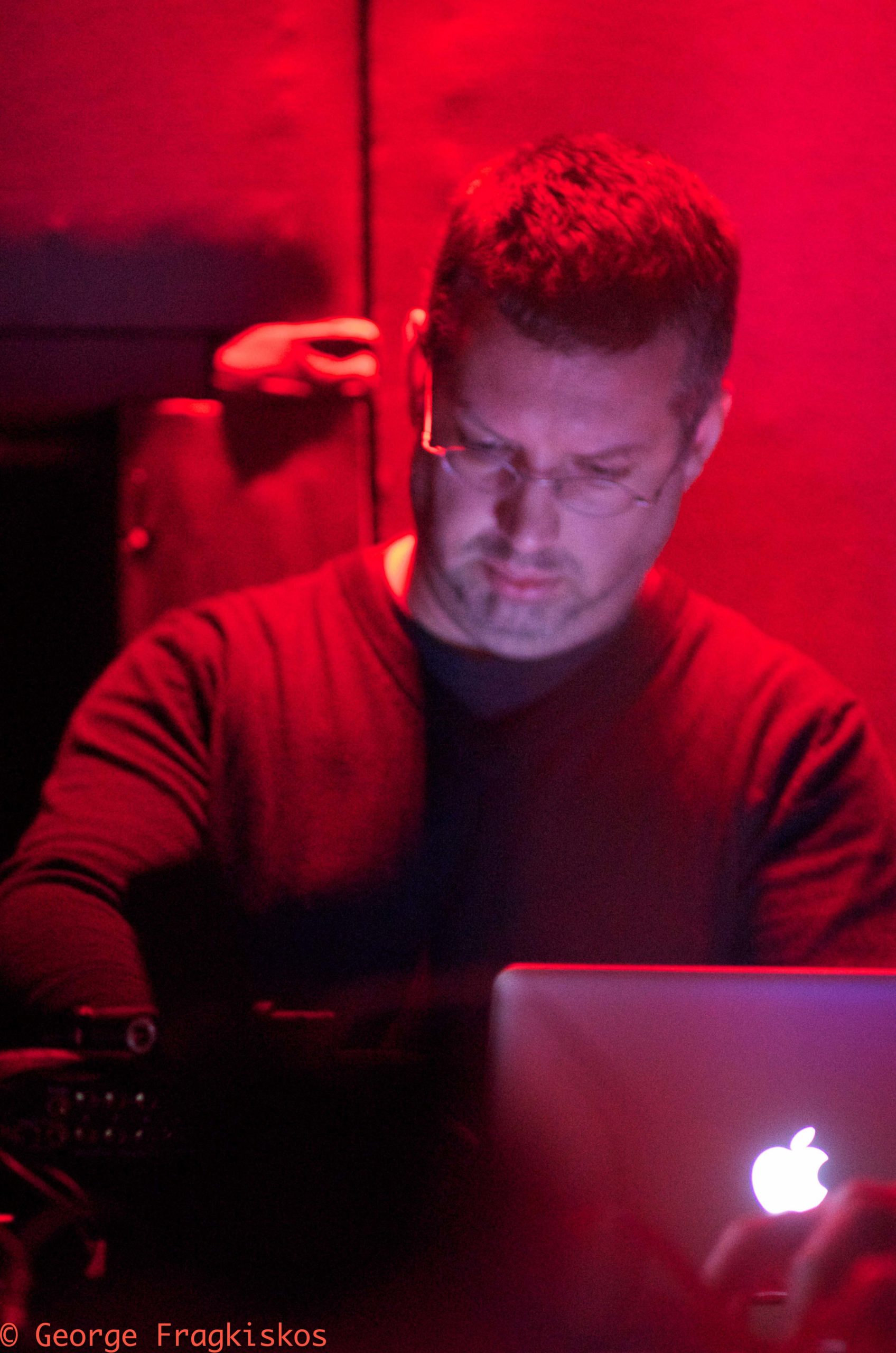 Sound artist with a background in acousmatic and live electronic music. 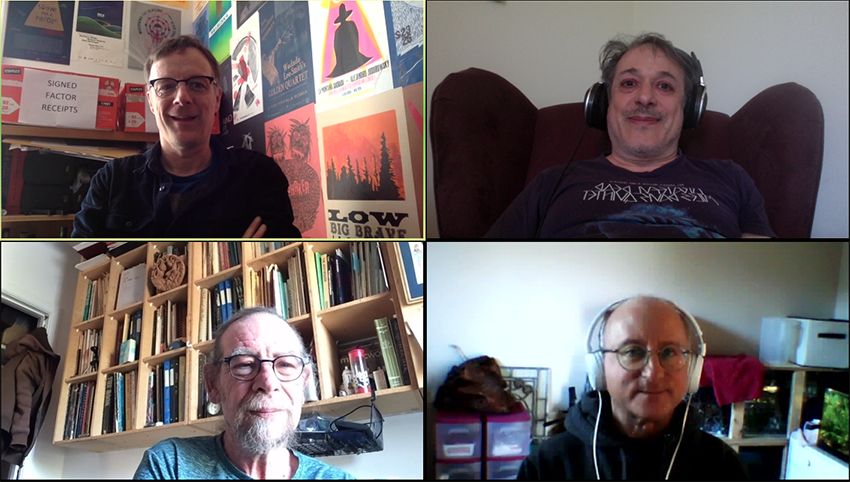 Based in Montreal, Canada, this ensemble formed to perform telematically daily (using Zoom), to serve as a way to both socialize and create collaborative music during the ongoing quarantine period. The members of the 312 Ensemble are all long-time members of the Montreal Creative Music scene.

Bryan Highbloom was one of the first free-players in Montreal, and over the past 50 odd years has focused on reeds, but is adept at everything from strings through organ.  He has decades-long experience with electronics–from signal processing, live-synthesis through wind controllers.

Lawrence Joseph emerged out of the original Montreal Punk scene, and was a member of a number of legendary bands.  These days he focuses on jazz guitar and free playing, using a variety of signal processing techniques.

Eric Lewis, a member of the Athens-based new media art collective Medea Electronique, is a brass player.  Originally from NYC, he is a free improviser who engages in live signal processing of his brass instruments. 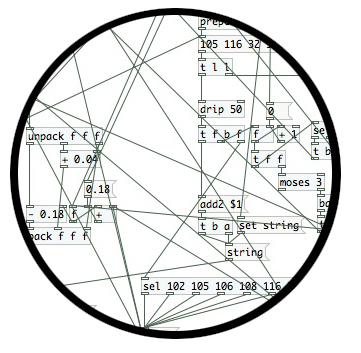 As a member of the Medea Electronique artistic collective, he has worked on various artistic and educational projects such as Echo and Narcissus, Soundscapes Landscapes and the Music Laboratorium at the Onassis Cultural Centre, and the Arduino Workshop at the Stavros Niarchos Foundation.

He is a regular collaborator of the ARTéfacts Ensemble, with which he has performed in concerts such as AMOK – Tribute to Fausto Romitelli.

As a solo artist, he has performed at various festivals and conferences worldwide.

As a teacher, he has delivered sound and interaction programming workshops in various venues both inside and outside Greece. Indicatively, he has given a workshop on a modular synthesizer at New York University as part of the 5th Pure Data Conference in New York and a digital synthesizer workshop at APO33 in Nantes, France.

He is the author of “Digital Electronics for Musicians” by the American publishing house Apress.

Marinos Koutsomichalis is a media artist, scholar and creative technologist. He was born in Athens, GR (1981) and has since lived and worked in various cities around the world.  His practice is hybrid, nomadic, and ethnographic, involving field-work, creative coding, critical theory, making, lecturing, live performance, workshopping, artist/research residencies, ‘Doing-It-With-Others’, and hands-on experimentation with materials and technologies of all sorts. His artistic corpus is prolific, yet persistently revolving around the same few themes: material inquiry/exploration; self-erasure; the quest for post-selfhood. He has hitherto publicly presented his work, pursued projects, led workshops, and held talks worldwide more than 250 times and in all sorts of milieux: from leading museums, acclaimed biennales, and concert halls, to churches, industrial sites, and underground venues. He has held teaching and research positions in various academic institutions, has published a book and numerous academic/scientific articles, and is currently a Lecturer in Multimedia Design for Arts at the Cyprus University of Technology (Limassol, CY) where he co-directs the Media Arts and Design Research Lab. 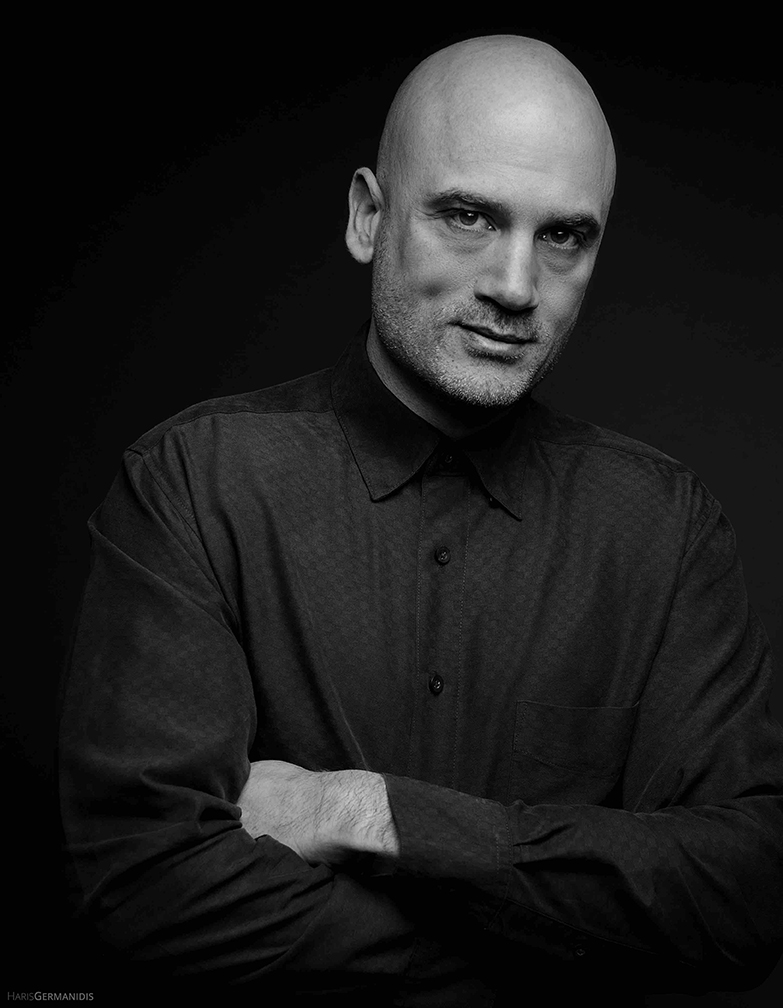 Born in Athens in Greece (1975). He gained his footing in live theater while in Chicago Illinois. Prior to his sojourn in Chicago, was deeply engaged in both independent avant-garde theater and in the popular theater of his native country. Since that time, he has rarely been without a film or stage project and as a result has embraced a wide variety of stylistic influences.

He works as a composer and sound designer since 1998. His works include compositions for small ensembles, solos, electroacoustic compositions, video art and multimedia shows. He has also composed the original music for theater shows, documentaries, tv series, short films and theater dance shows.

As a sound designer he has worked both in feature film projects, documentaries, advertising, theater and short films. He has also recorded extensively the landscape of Greece and has been involved in major sound projects like the SoundscapesLandscapes a sound walk in Athens Greece in the neighborhood of Neos Kosmos and Keramikos.

He is a co-founder of Medea Electronique synergy of Artists and Koumaria Residency. 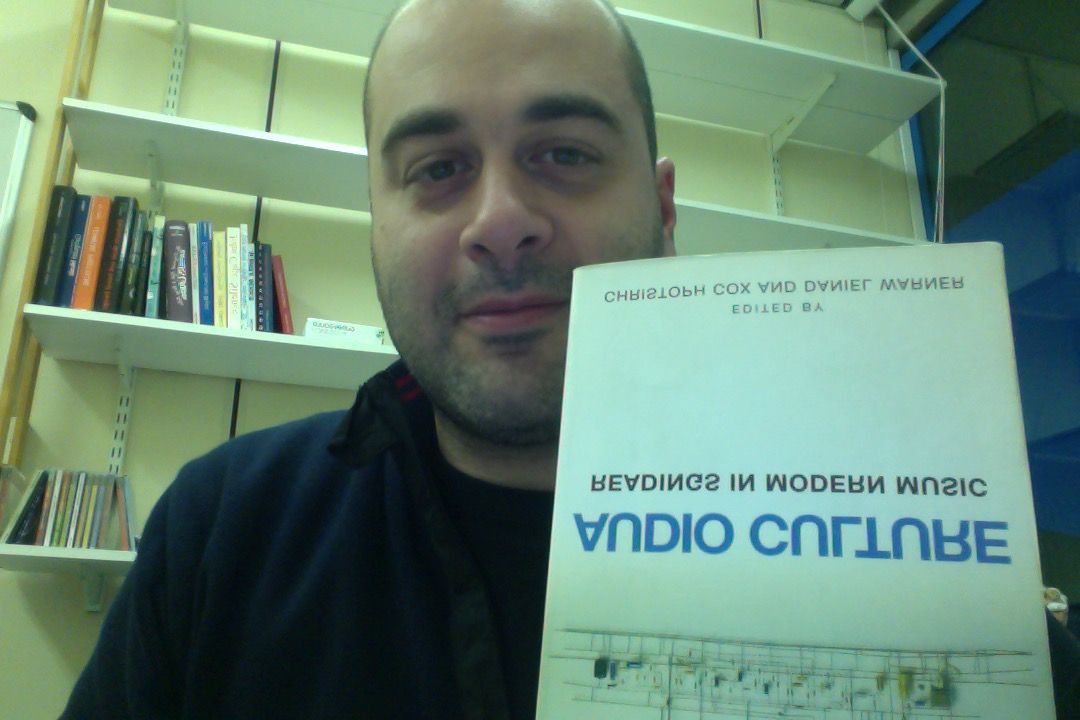 Panos is a composer of electroacoustic music, sound artist and academic. He is a Lecturer in Music and Audio Technology at Bournemouth University, UK. He holds a Bachelor of Arts in Music and Music Informatics from Ionian University in Greece, a MusM in Electroacoustic Composition & Interactive Media from The University of Manchester in the UK and a PhD in Music from De Montfort University.

His work falls in the area of sensory ethnography with sound and the role of recorded voice, and soundscapes in the way new artistic musical works and narratives can be created. Also, to the role of artistic work in raising awareness about the importance of cultural heritage. Special importance is placed on the synergy of soundscape recordings, verbal narration, technology and the opportunities provided by the electroacoustic studio.