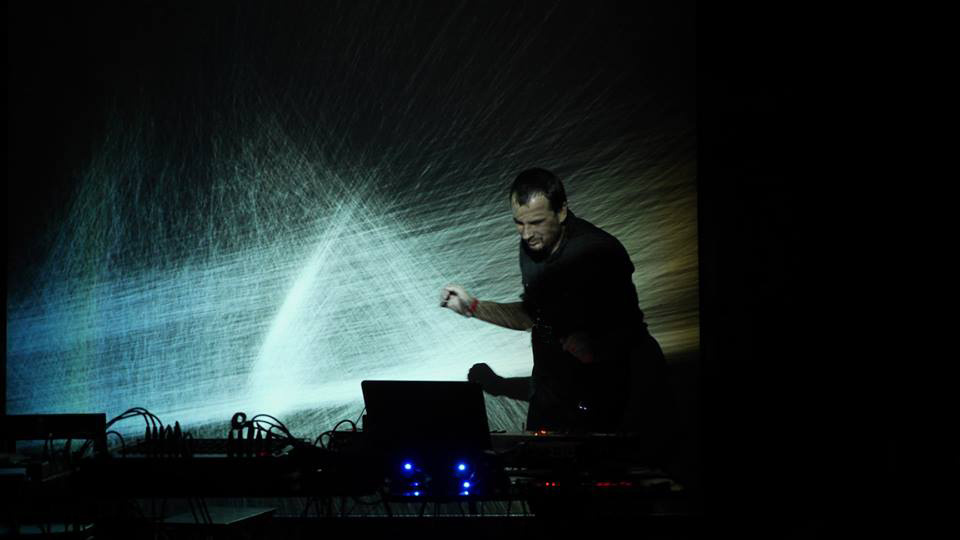 Karatech – Dominik Brun was born and raised in Switzerland. With an early love for music he starts at the age of 7 with piano lessons and later on begins to discover the power of electronic music. His restless spirit leads him to compose his own music, influenced by the dark electro and ebm sounds of the time.

In 1999 he started collaborating with “Pharmakon” and organized underground electro parties. Today he lives in Athens, Greece and he is working on new danceable sounds with roots in dark electro and techno. 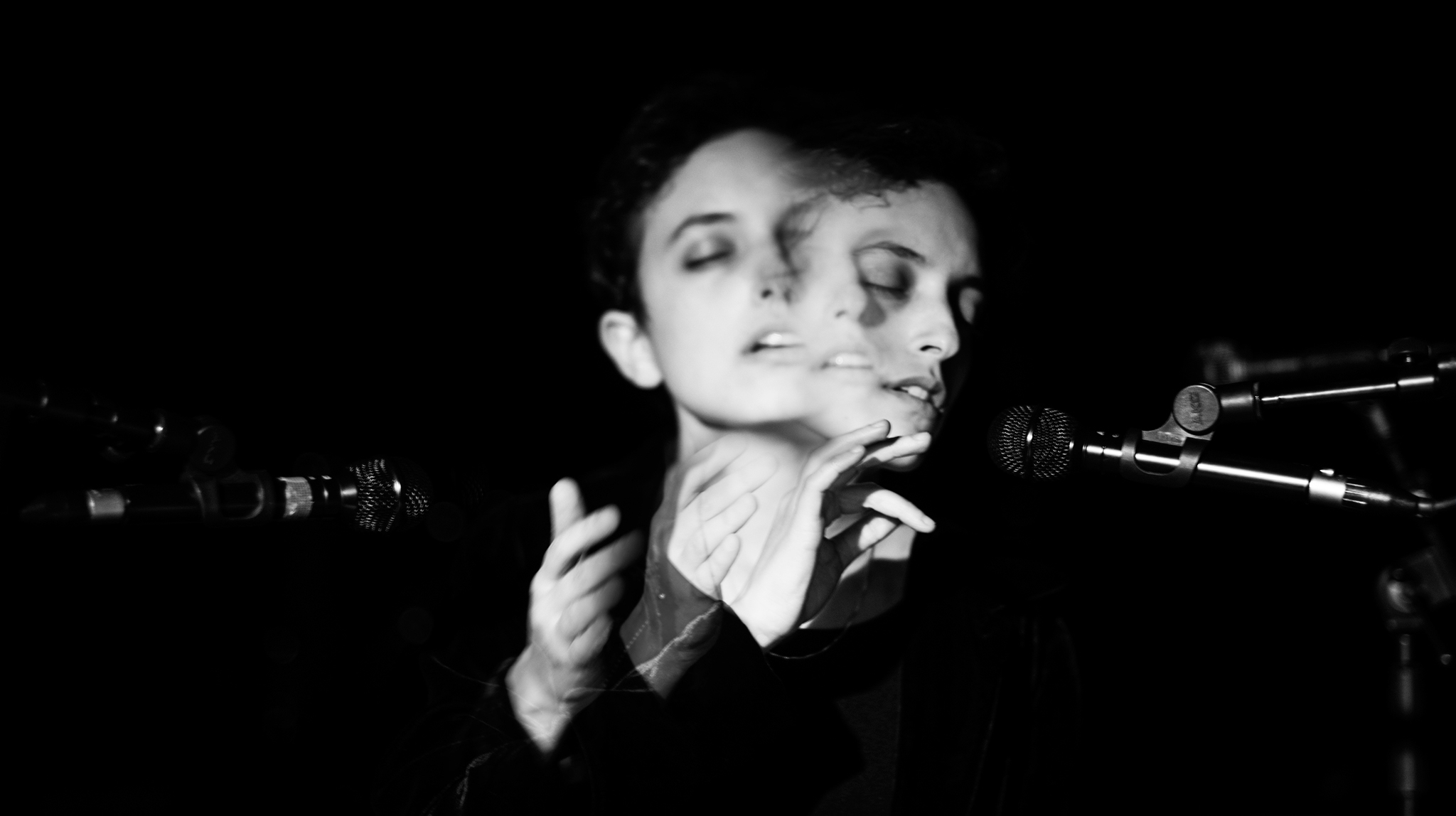 She has worked and performed with a wide variety of artists and ensembles. Ziv holds an MA in Sound Arts from the University of the Arts Londonand a B.MUS in Cross-disciplinary Composition from the Jerusalem Academy of Music and Dance. She is the recipient of the Siday Fellowship for Musical Creativity (2018-19) and the AER Art for the Environment award (2019). 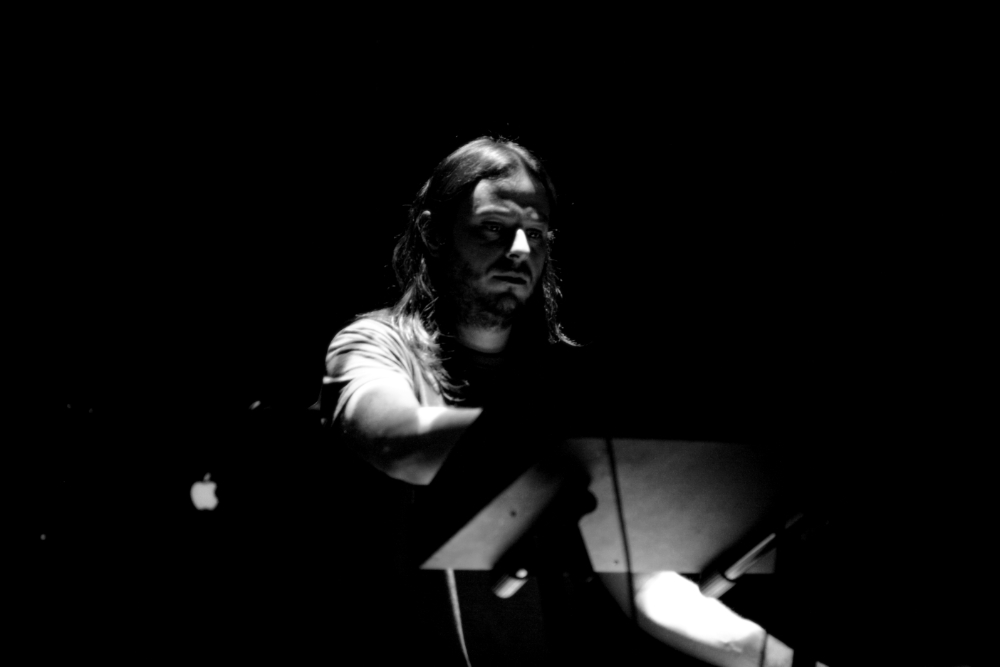 Vasilis Avdelas was born in 1976. Using  synthesizers as his main expressive tool, while using a wide palette of sounds from other musical and non musical instruments and field recordings, produces music. Frequently his music accompanies art exhibitions, dance theater and other performances .He has also produced complete concept albums, meanwhile actively participating in  music groups (Χείλια Λουλούδια, Ben and The Immigrants). He lives and works in Corfu, Greece. 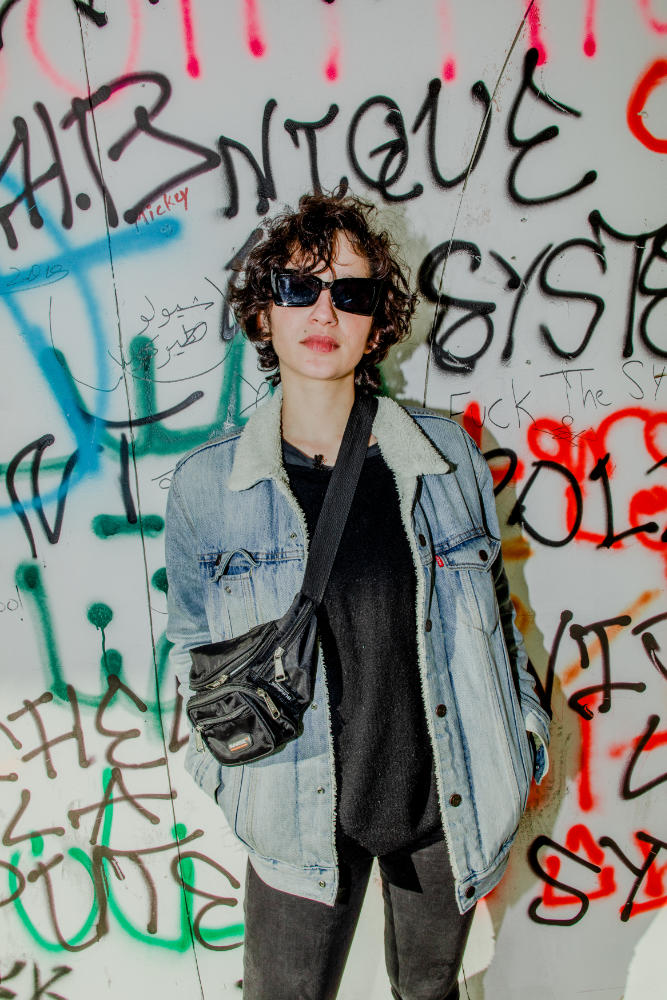 Nour Sokhon is a Lebanese artist/sound designer/ filmmaker based in Beirut, Lebanon, her creative explorations have been in the form of sound performances, interactive installations and moving images. In 2014, she achieved an undergraduate degree in Fine Arts from AUD and in 2017 she culminated a large scale Masters project; a documentary entitled “People on Sound”, during her time at the GSA in the UK. In 2019, she received the Emerging Artist Prize at the Sursock Museum, for a moving image piece entitled “Revisiting: Hold Your Breath”, and has recently been awarded the Braunschweig Project Sound Art 2020 scholarship. 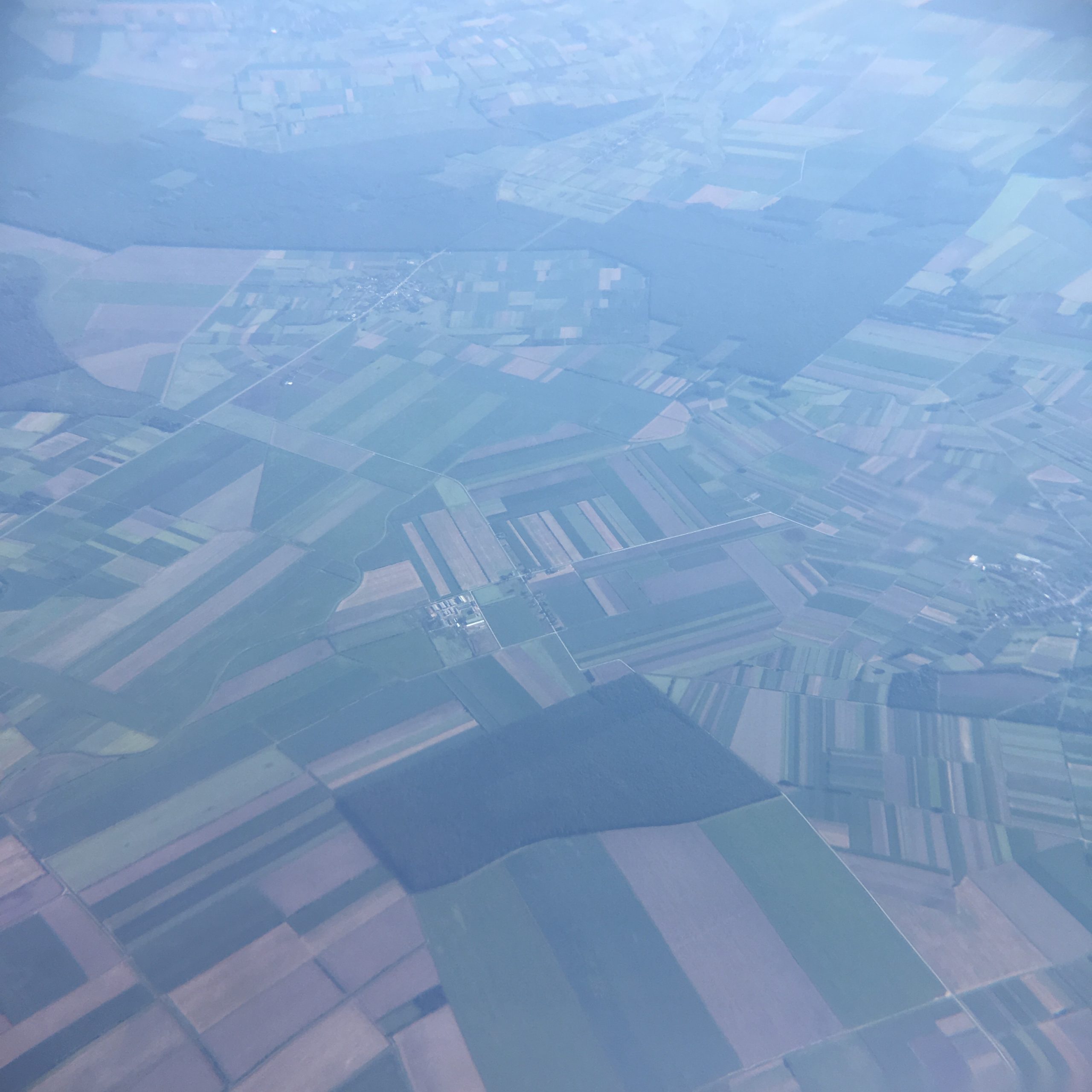 Urban Reveries came about through Dimitris’s and Anastasis’s collaboration in the context of Ubique (formerly CMRC), where they both studied contemporary composition, philosophy & politics of sound and programming under Marinos Koutsomichalis. Starting off by mixing sounds of ships and water with generative synthetic voices and experimenting with the possibilities of sonic reproduction in physical space they have developed a sonic world of fleeting, dispersive and flocking events that maintains an organic repetitiveness or rhythm and that they call techno concrète.

Subphonics were formed after a year of weekly free improvisation meetings amongst sound art students and various musicians in London. Held at the Sound Arts department of London College of Communication (UAL), the meetings were informal, open to everyone interested and aimed to explore the possibilities that an encounter between sound improvisation and other extra-sonic practices could unfold. In 2019 more people came together as a group to perform Jamie’s Turner “Haiku Scores”, a piece that utilised haiku poems as scores for free improvisation and was performed at the LCC. Since then, they decided to form a collective of musicians and performers focusing on improvisation, not just as a methodology but also as a system of actions to be shaped/influenced/structured through different means. Among their current and past research topics there is poetry and vocality, language and speech, scenography, mask making for sound performance, live soundtrack for experimental cinema and improvisation for theatre performance. They have performed in various venues in and outside London, including Hill-House festival in West England, Grow Tottenham and Fokianou art space in Athens. 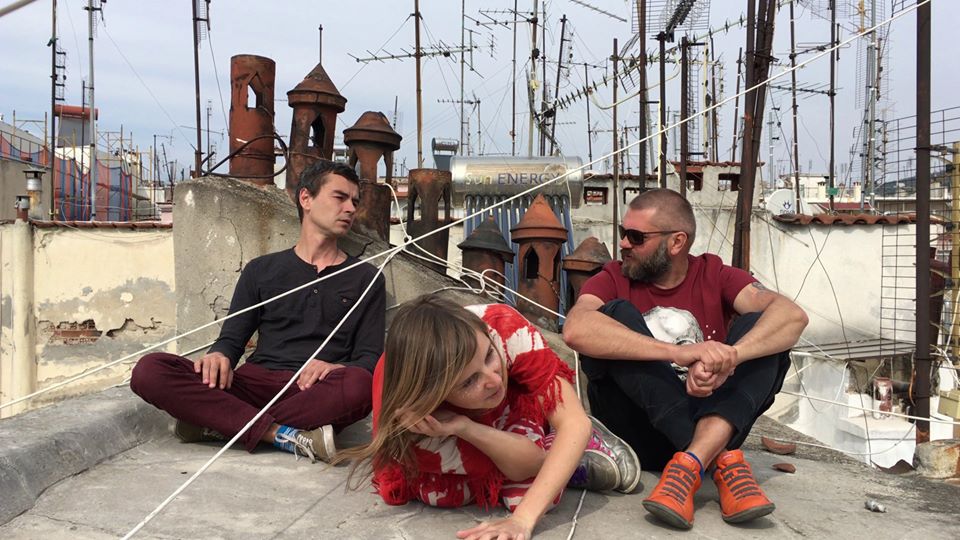 Once upon a time, on the shores of the Aegean Sea, in the ever-buzzing and ever-relaxed city of Thessaloniki, two musical streams of Ukrainian musician Hladun Oleksander (Dunaewsky69) and Greek-Ukrainian sound engineer Michael Stadniychuk merged.

The result was the HITSYOURSELF project, based on free energy flows, unlimited improvisation, and careful attention to sound. 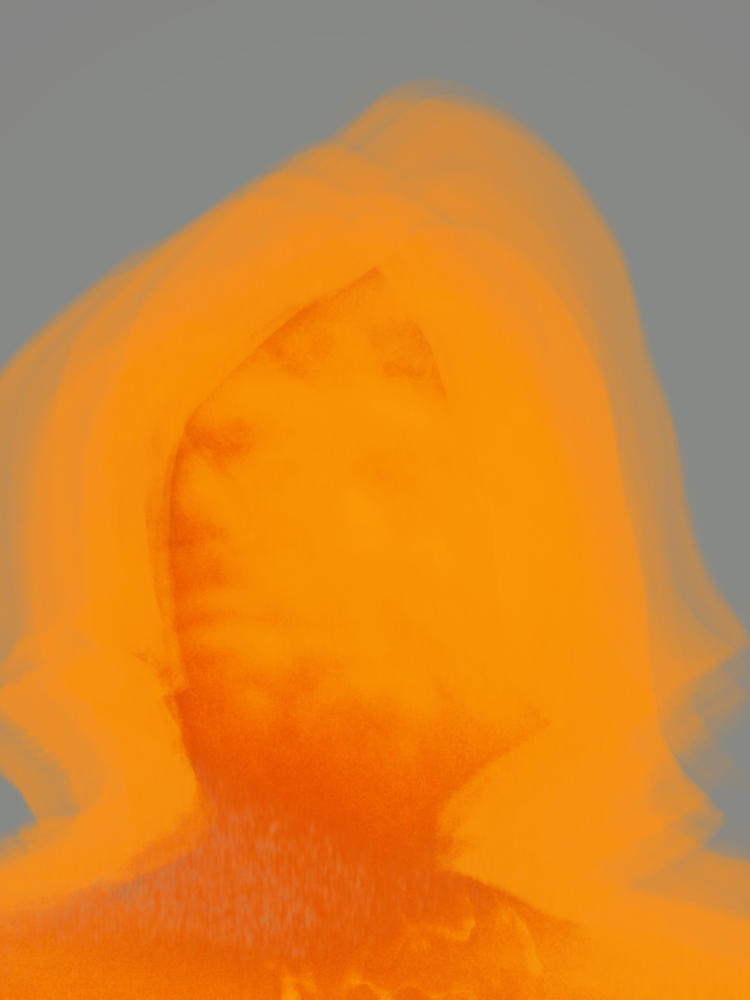 Frustrated visual artist. Frustrated musician, I decided to become an architect. An architect of nothing.

Rebonjour is an invitation. Since 2012 mixing music stories. All of the tracks are a reflection of what I was passing through that specific time. The goal is to open connections with whoever wants to dialogue. It also works as a healing process for me and I hope It extends to everyone. Have a safe trip. 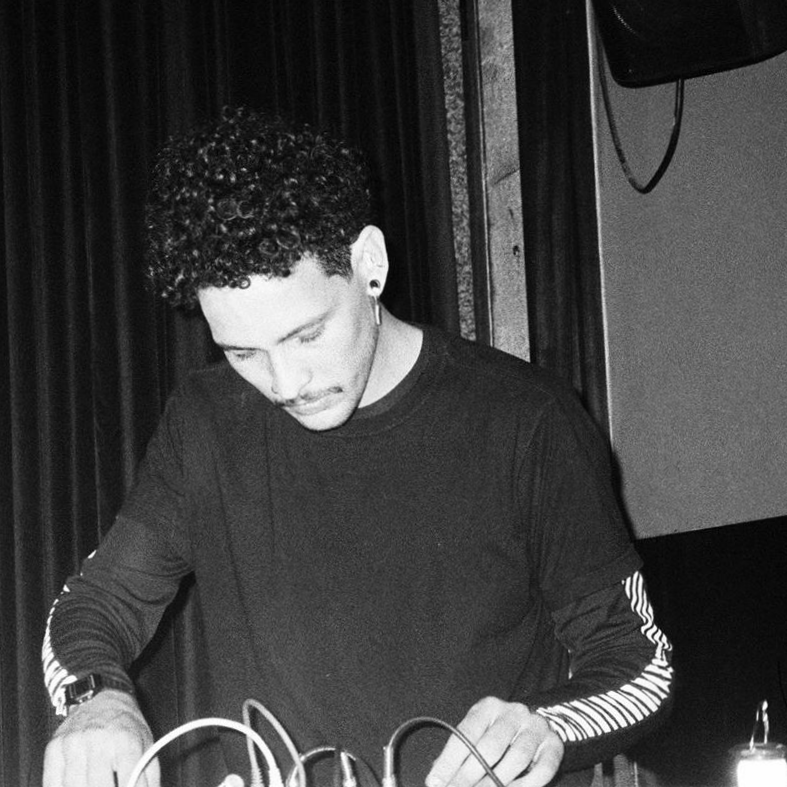 Gaspar Cohen (130_IVXX) is interested in unstable concept-driven systems. Part of the power electronics trio 100ROQUE, works as a sound artist and performer amplifying the relational space of an experimental urbanity. 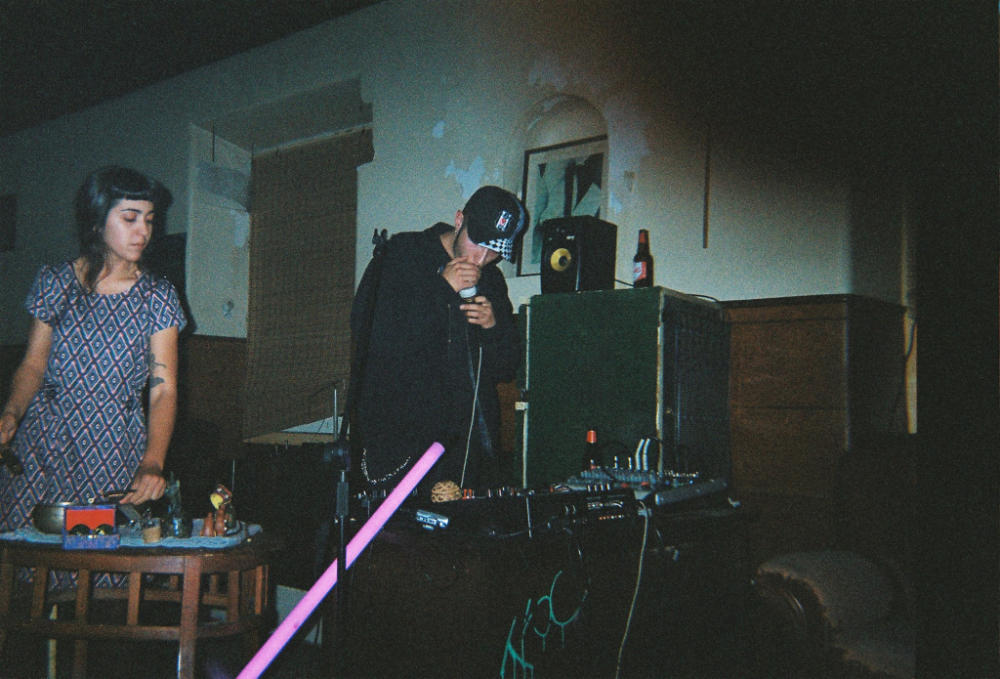 DIES LEXIC (ex-Dyslexic Project) is an audio-visual performance duo created in collaboration between Inês Tartaruga Água and Xavier Paes. Started in mid-2015 as a way to freely explore sound as material and aesthetic experience. Influenced by the current experimental and improvised music scene in Porto, they build invented instruments, deconstruct and re-arrange amplified electronic circuits, and resort to archives of the unconscious to compose an immersive and meditative sound experience. They look for the contrasts created between soundscapes that evoke nature and the electronic and corrosive noise of the “machine”. 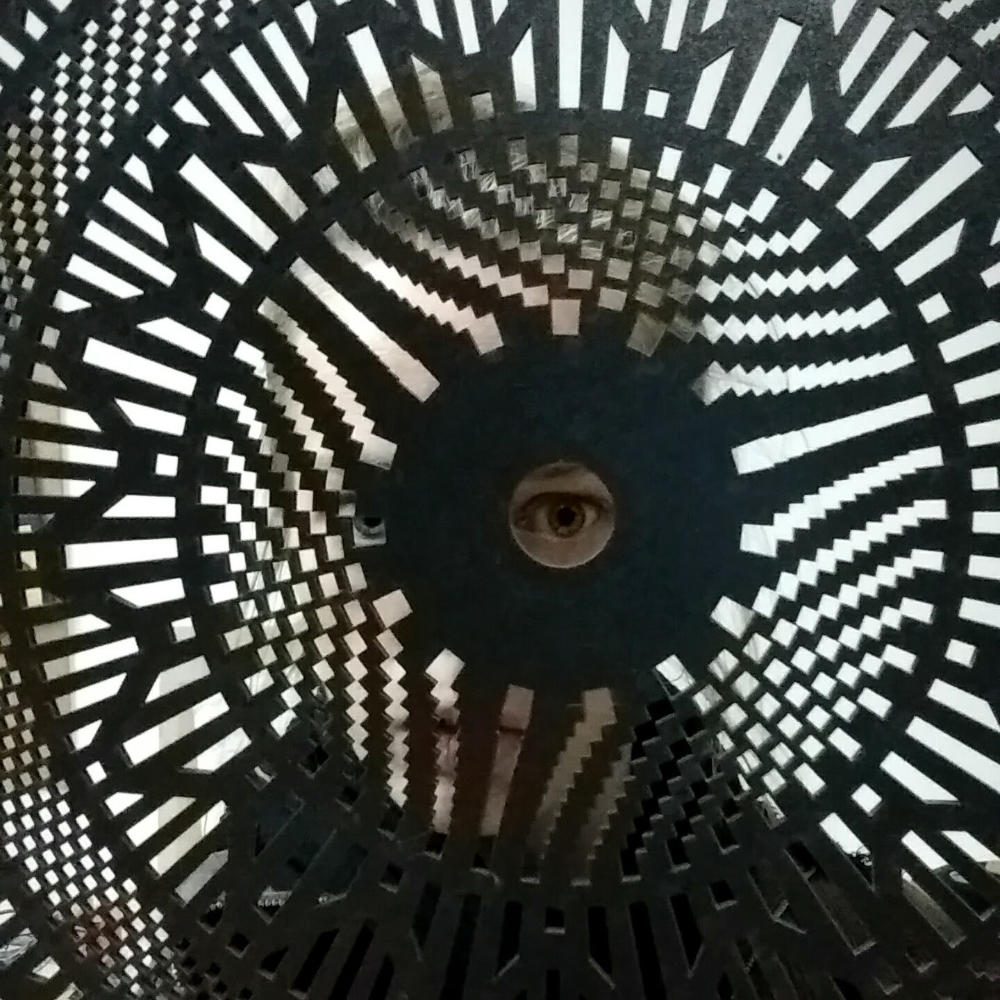 Intrigued by the phenomena and history of optical sound, Mariska de Groot (1982, NL) makes, performs and composes for comprehensive analog light-to-sound instruments and installations which explore this principle in new ways. Her work often has a reference to media inventions from the past, with which she aims to excite a multi-sensorial and phenomenological experience in light, sound, movement and space.

Mariska obtained her BA in graphic design in Arnhem (2000-2005) and received her masters diploma at the ArtScience interfaculty in 2012. In 2009/2010 Mariska received a Startstipendium from Fonds BKVB. She won the BNG Workspace12 Project Prize in 2012, in 2014 she won the O68 Price for German/Dutch artists and in 2016 she received the Creatives Industries Talent development grant.

Mariska de Groot has presented her work at several national and international events. 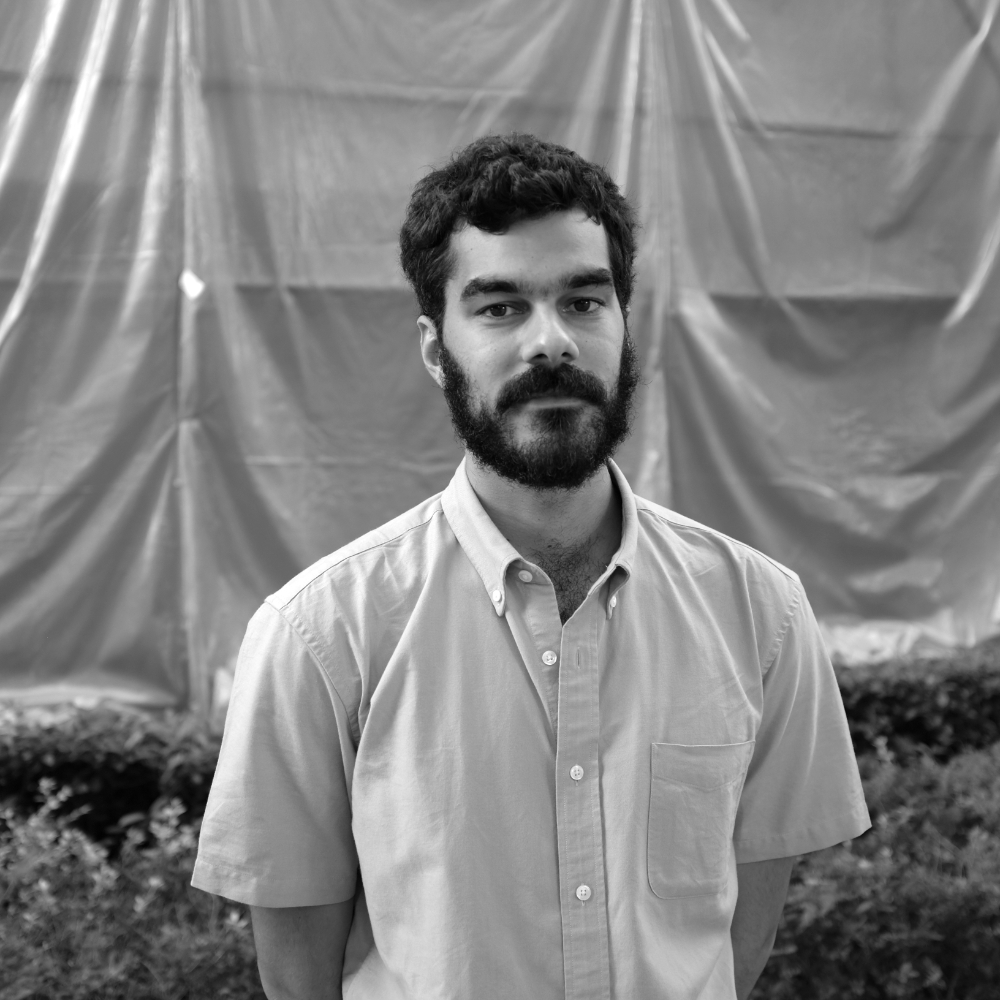 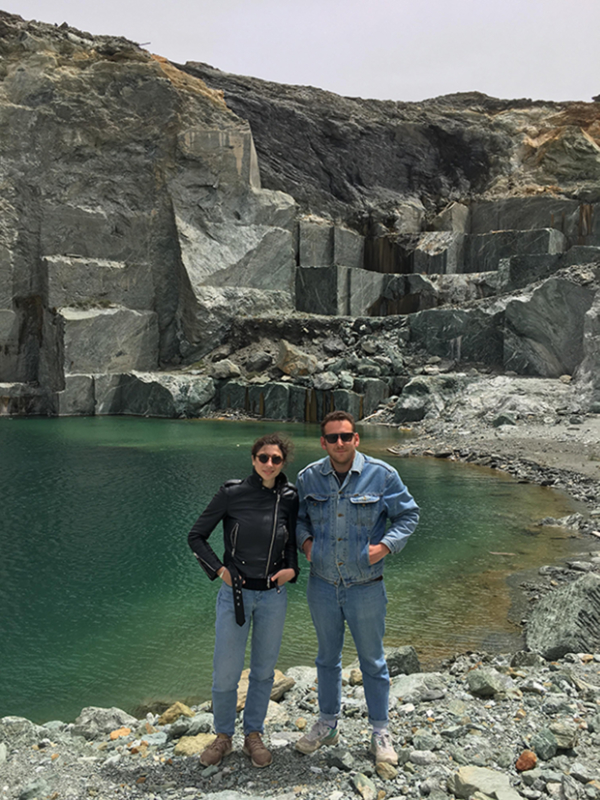 hd.kepler is a platform dedicated to art research, created by Eleni Riga and Florent Frizet. It aims to connect individuals’ ideas focused on the notion of the economy of gaze, experimentation, cultural translation, anthropology of images and remediation.

hd.kepler. is meant to function as an exoplanet. We are always in research of a habitable place to establish, share and exchange artistic and curatorial practices. hd.kepler. is interested in developing its activity between France and Greece, acknowledging opportunities could be found elsewhere. 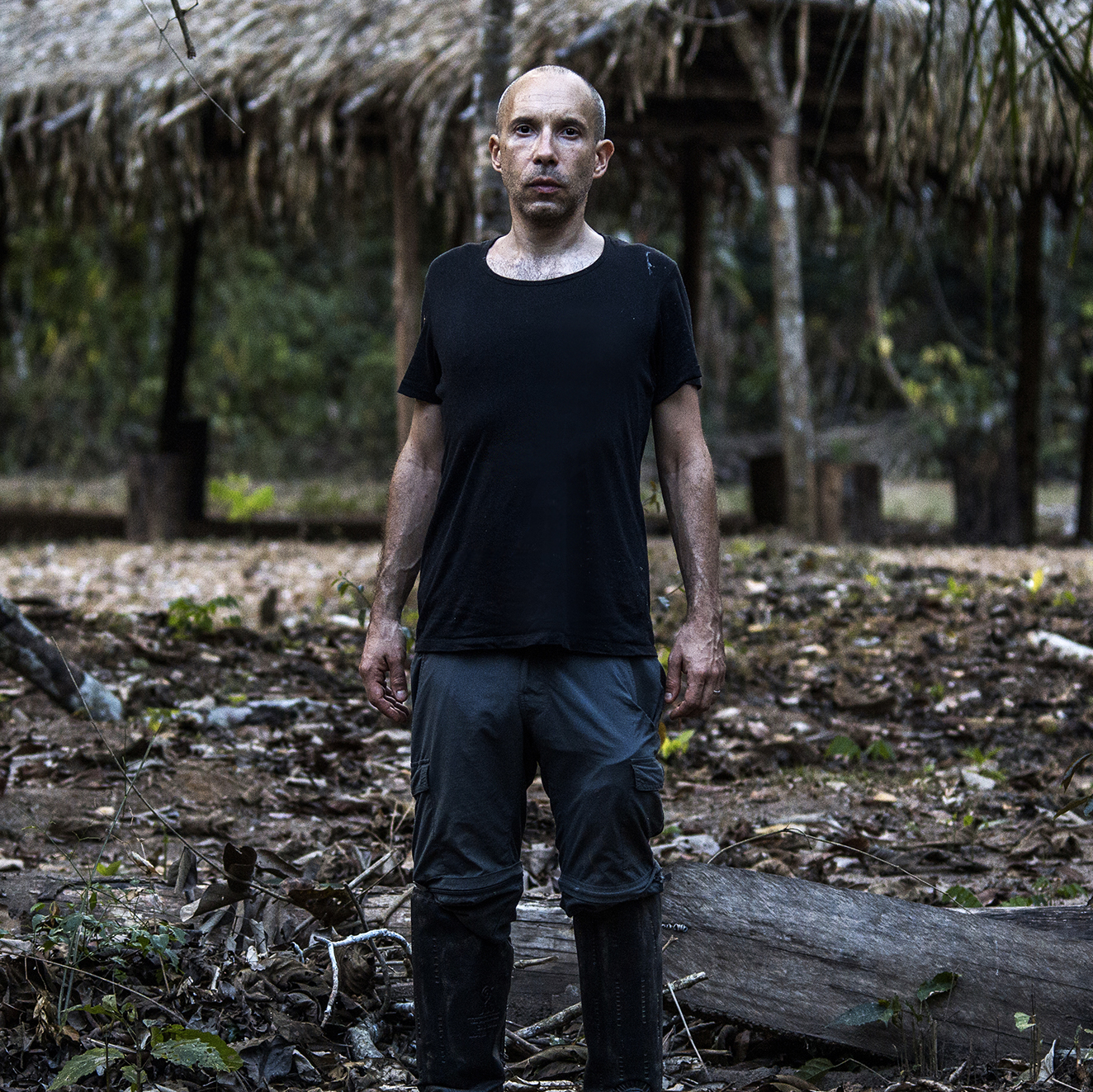 For some years he has been pursuing an acoustic exploration of tropical environments. This work of picking, walking and extensive surveying, convoques in situ other modes of attention, in particular through listening, to what is surrounding and transforming us. Composing with voices, from spaces and species, revealing their own musicality, their extent, their timbres, becoming attached to interstices, to indistinctly, focusing on the diversity of signs and interactions of our non-human neighbors…. But beyond the documentary utopia, the false transparency technical paradigm or the egotistical claim to be an author, all this is above all a necessity of relationship, a way of being in the world, to feel alive among the living. 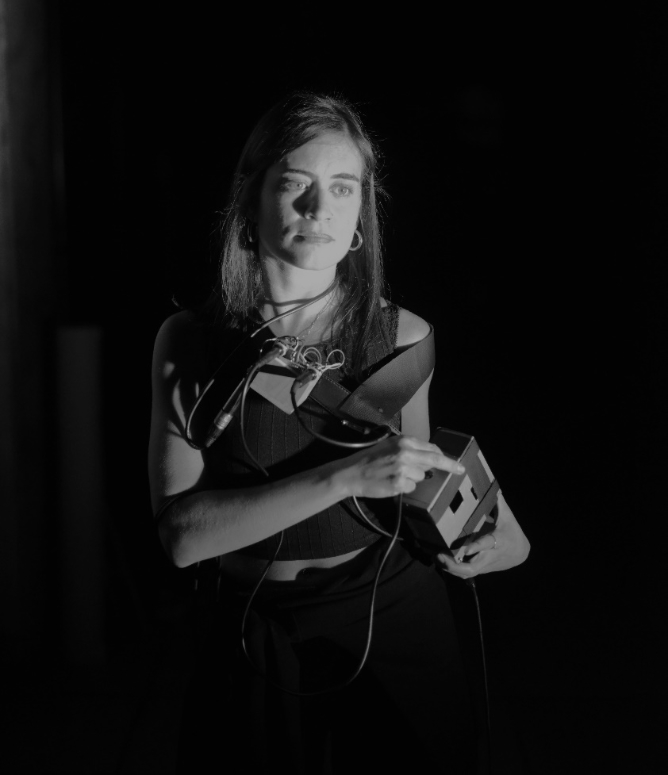 Dimitra Kousteridou is a multidisciplinary artist based between Amsterdam and Athens. Her focus is on time-based, site-specific installations that manipulate noise and sound through the use of physical objects. The core of her interest lies in deconstructing the visual identity of subjects or objects and infusing them with new acoustic character, reinforcing the physical, aural and aesthetic qualities of their soundscape. Recently working on improvised sound compositions with handmade instruments (free formed synthesizers).She has performed and exhibited in the UK, the Netherlands, Germany, Norway, Portugal and Greece. 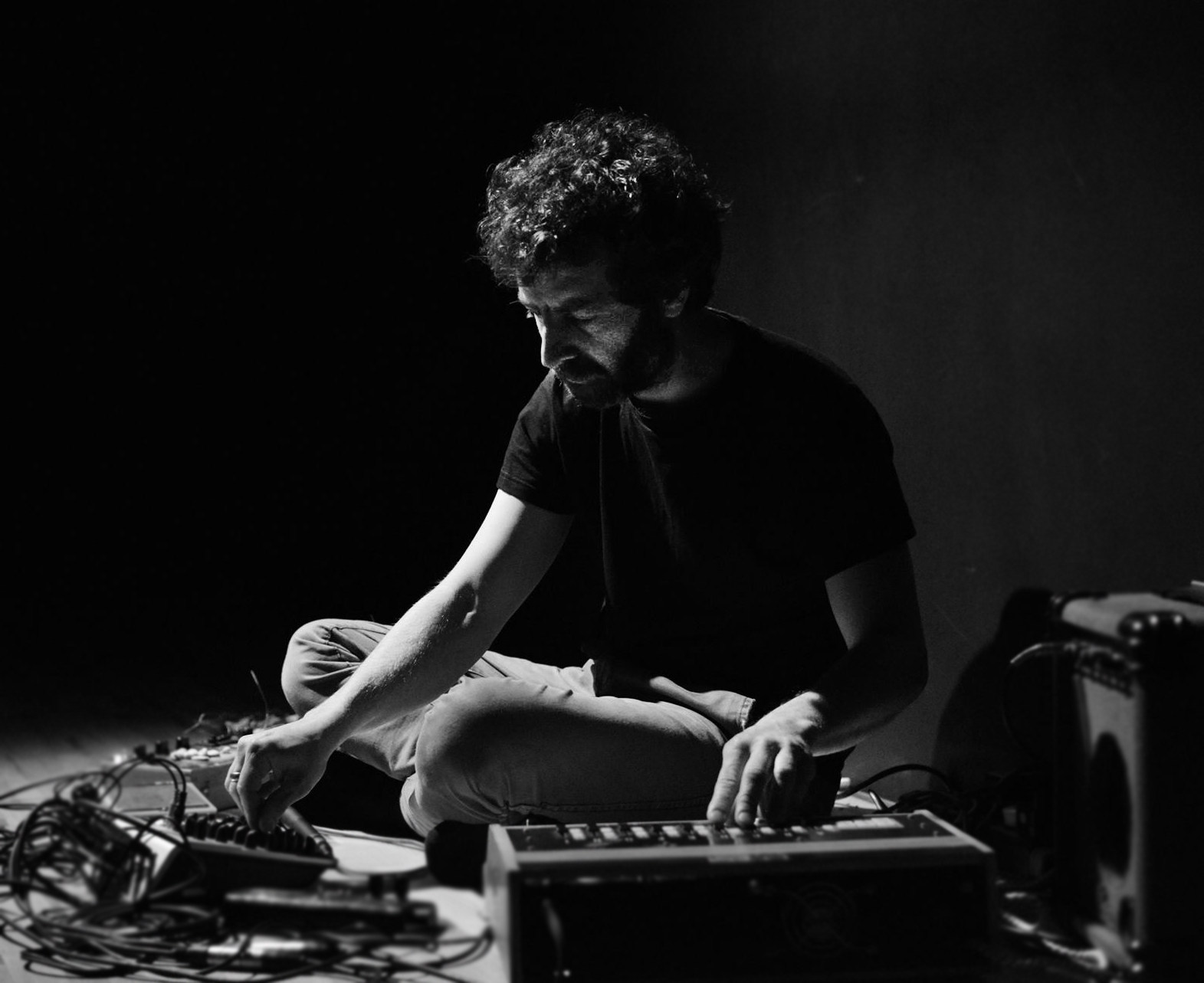 Andreas Monopolis was born in Corfu in 1976. he is an electroacoustic music composer and instrument maker. His artistic impulse is expressed not only through music, but also through images and materials.

Under the name “MoCM”, Andreas Monopolis sets up an ideal workshop for the creation of original DIY electronic-handmade constructions. Through this workshop the recordings, the brain storming, the unusual composition and performance techniques take shape, while the unconventional ways of expression and interaction between the materials and the human factor represent the fundamental – bizarre tools that are used for the artistic production. 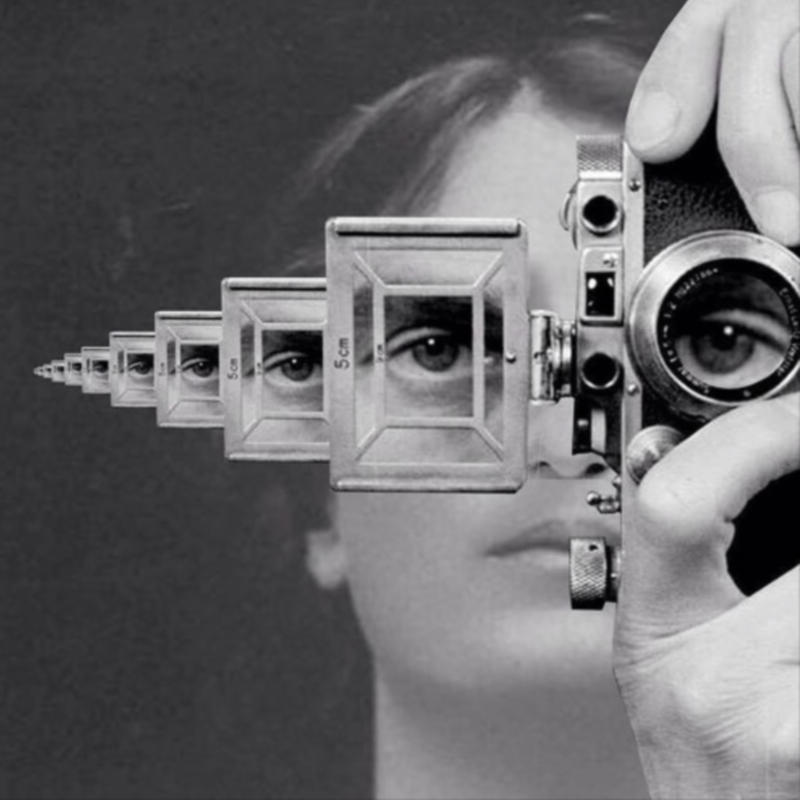 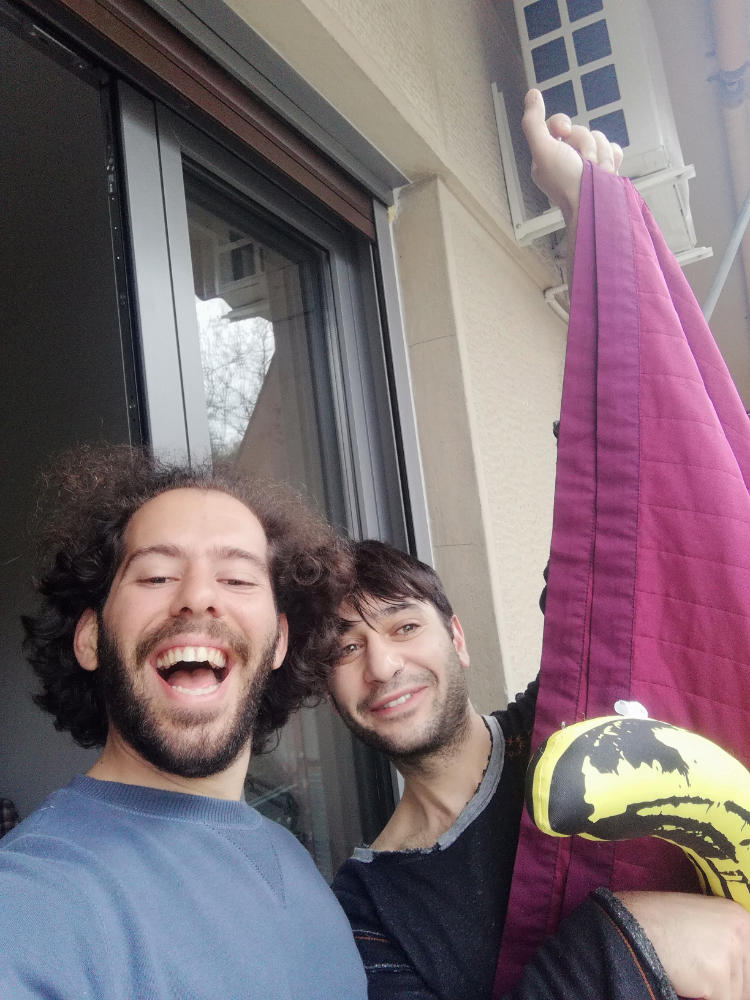 The band is a duet that is based on rhythm, ambient and noise . One side is Alemis-Triantafyllidis Romanos who plays guitar and plugs combined with electronic circuits and the other side is Ara Bogosian who plays percussions with electronic circuits . It’s a “living room-made” project that formed just in the period known as “ quarantine, SarsCov-19 etc…” . Recordings are made ofone take improvisation and minimum afterwards processing . We play together in a neofusion band, thus we decided to “fill” our nowadays limited routine with creativity, out of our “normal” music perception and sound ingredients. 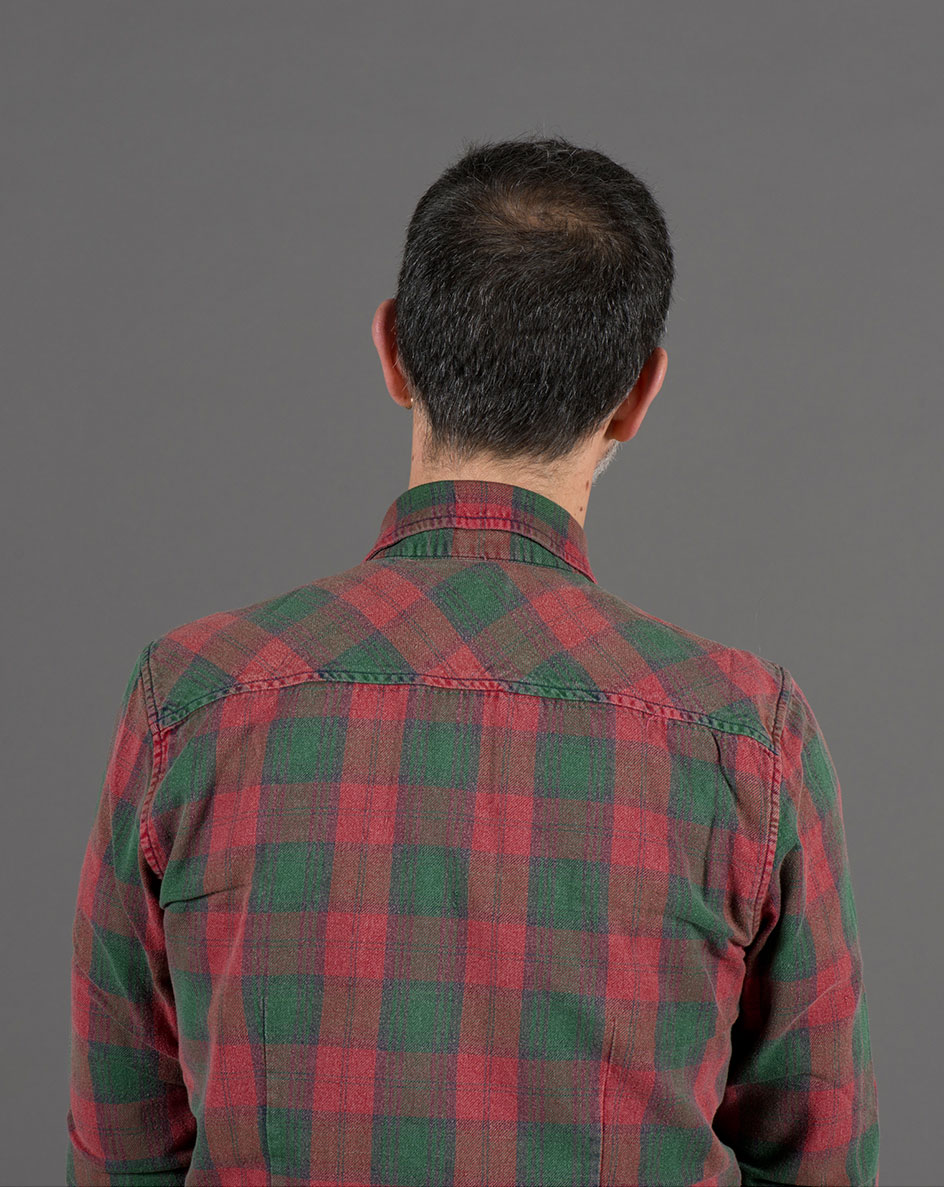 Born in Viseu in 1962, he lives and works in Porto. He graduated in Painting at the School of Fine Arts of Porto (ESBAP) in 1987 and exhibits internationally since 1982.

In 1992, for his exhibition “Mute… life”, he started the multimedia collective Mute Life Dept. In 2003 he co-founded the Crónica media label. He collaborates with Miguel Carvalhais in the electronic music project @c. He is an assistant professor at the Faculty of Fine Arts of the University of Porto.